The Scout slipped through halls on silent feet shod with teeth. He lurked in shadows and heard the whispers of fear. Space Catz stowed him away on their Pounceships as they slunk behind enemy lines. His skull necklace murmured subtle secrets from the pasts of robots and goats. He is immune to her integers and merely watches as she drinks. The Scout knew that years of progress were falling away before the old superstitions.

Art Dump: Lots of stuff I've been working on the last few months. 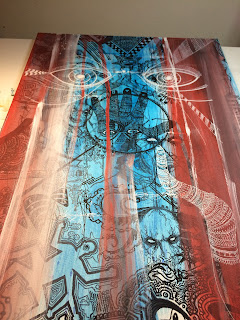 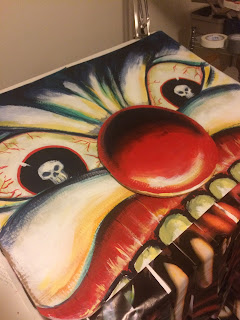 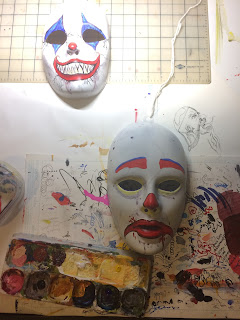 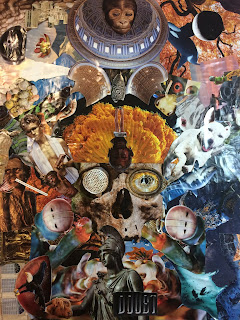 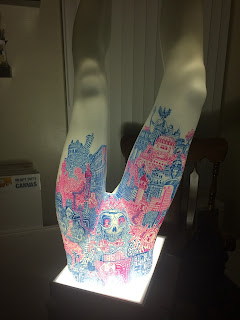 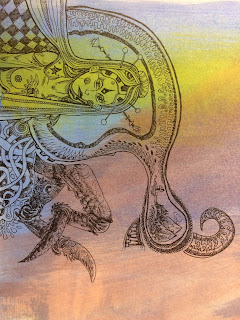 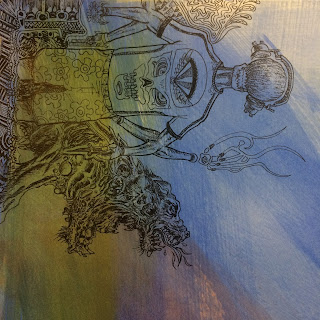 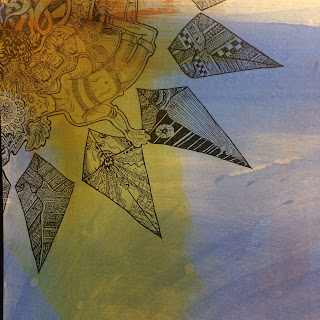 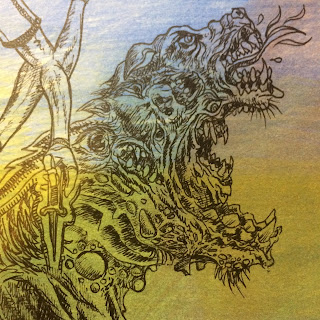 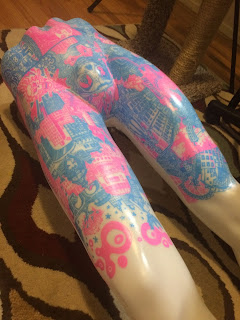 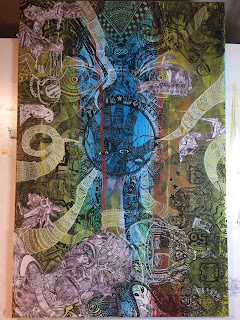 Posted by Unknown at 2:39 PM No comments: 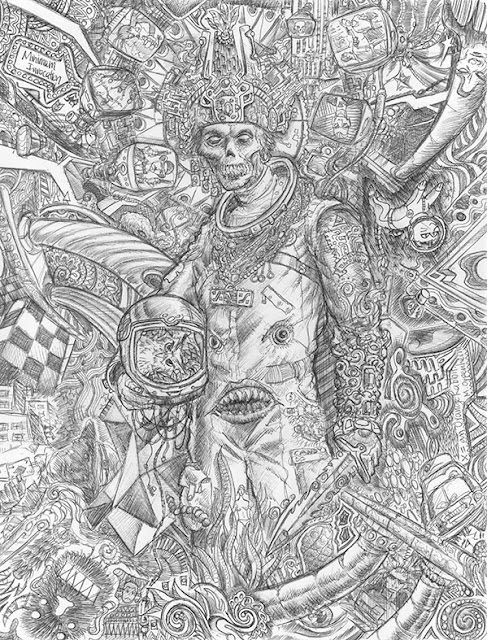 Incan Time Traveller
This dream takes longer to download because it has to be translated from Quechua.
He told me the Mayor could use some good news. "The Golden Fortress is holding and the Owls still hunt with the Mother Moon."
I told him the Mayor was dead. He seemed unphased.
"It doesn't affect the plan. When you see the Mayor again, tell him 'The First of the World are with him until the end.'"
The Son of the Sun turned and walked back into the Flux. When I awoke, I just stared at the feed screens, unable to understand even simple English for several days. 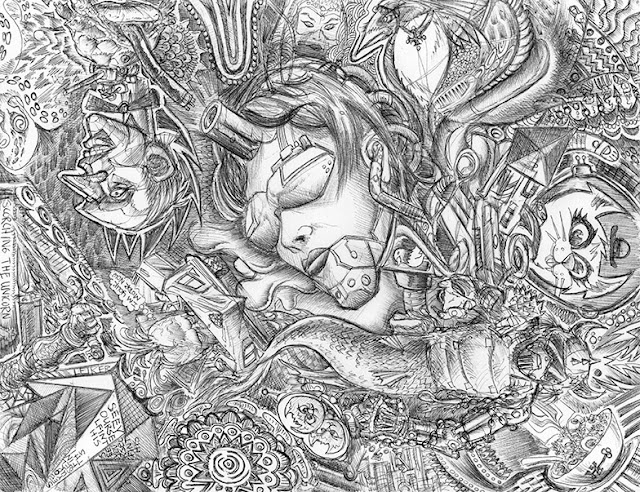 Scorching the Unicorn
She was a mythical digital creature to be tracked and hunted. Analog traps for an electric beast. We could see ourselves in this system, and her downlink made the our avatars shimmer with watery glints of data. The blood would be a never ending flow of future secrets. She trusted us, but we would burn her network. There was no hesitation in our sin because we believed as Coriolanus; that "Action is Eloquence".

3 Plane Drawings and a Dream 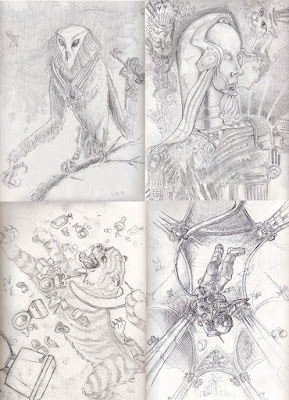 Some drawings from an 8+ hour flight back from Spain.
-Owl Key
-The Museums
-Tiger Toilet

And sketch for a dream I had where I was floating around the ceiling of a cathedral, scared of the heights, upset that I was bumping against priceless frescos, and worried that the locals wouldn't like the fact that an astronaut had the keys they needed for their service.
Posted by Unknown at 9:51 PM No comments:

Operator Is Standing By! 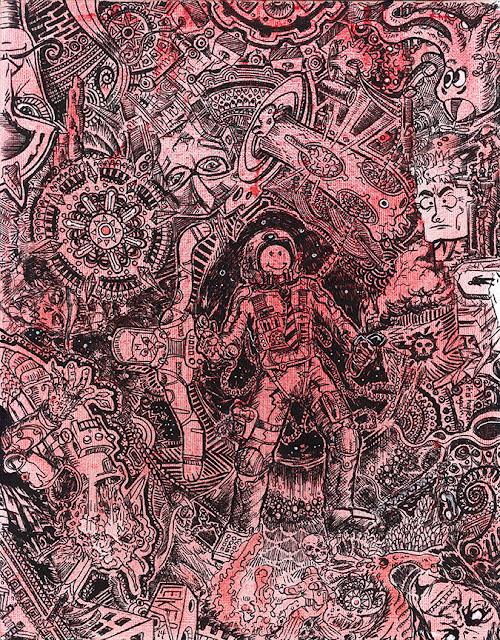 Call Now! Operator is here twenty-four-seven, waiting to talk to you! Space Catz running wild? He'll patch you through for interstellar catnip!* A bad case of the Melts? He'll help order a new sword!** Portal collapsing? He'll connect you to temporal control for a new modulator and get them to throw in a free Plutonium Slug-Tree!*** Offer expires while you wait! He lives to help, so help him live and give him a call! Lines are always open!

*Requires pre-approval, not available in all realities. Taxes and fees remain a mystery.
**Except where prohibited. Offer not valid in the outer nebulas. Must live within a 10 parsec delivery area.
***Use only as directed. Sentience not guaranteed, we're only guessing what this thing is.

11x14
Acrylic paint and pen on canvas board
Posted by Unknown at 9:21 PM No comments: 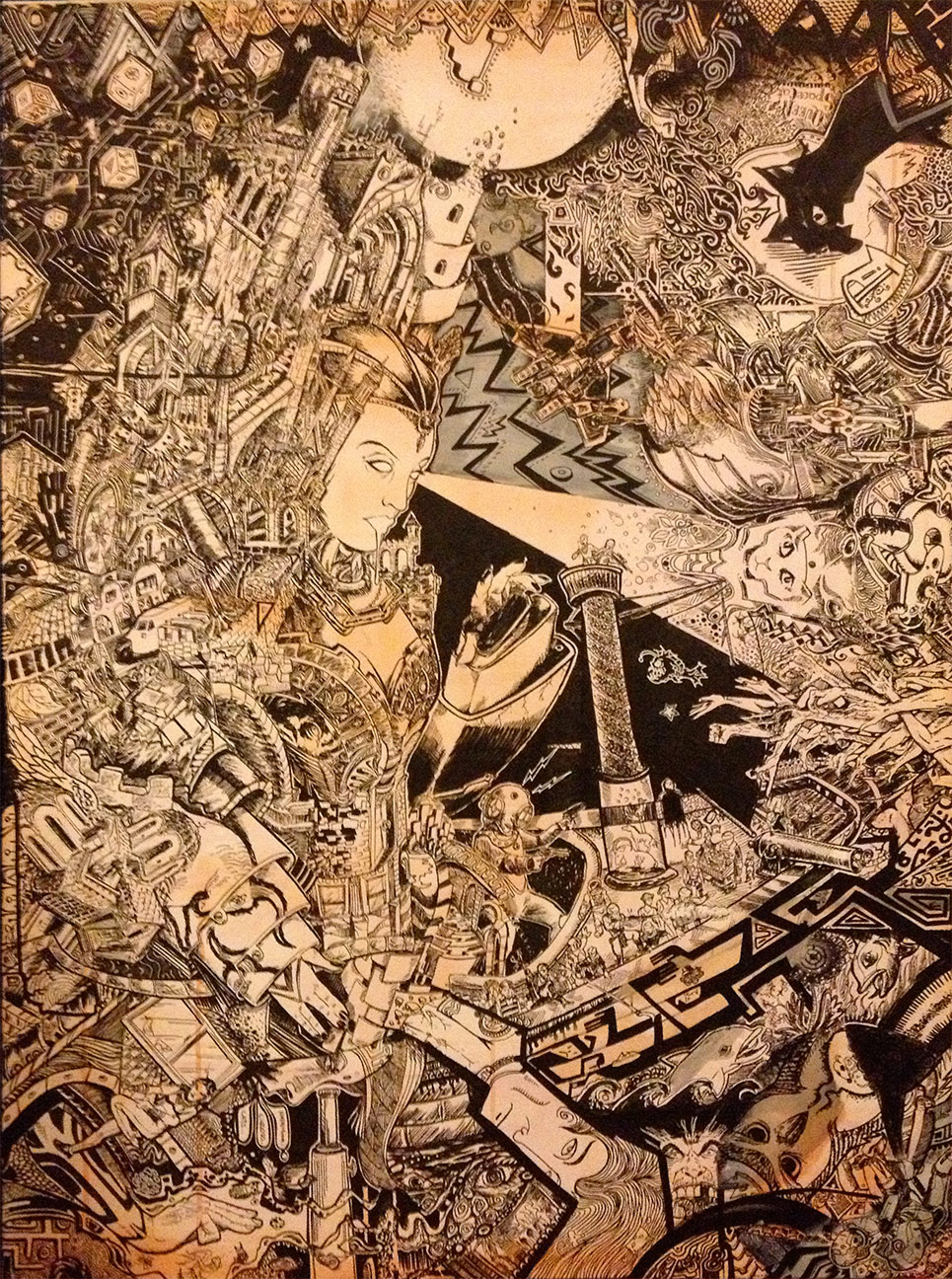 They thought she was just a library; a sleepy pile of dust and books. A surprise attack, and one more point on the map would fall into the void. The Mayor and his friends would be demoralized and pushed one step closer to surrender. She was just a library... of every book on tactics and strategy and war from all reaches and realms. Her charge was efficient and precise. Her defenses were impervious and elegant. Her plan was ruthless and thorough. To celebrate her quick and decisive victory, she settled down on the edge of the darkness with tea and an ancient book on great sea battles. 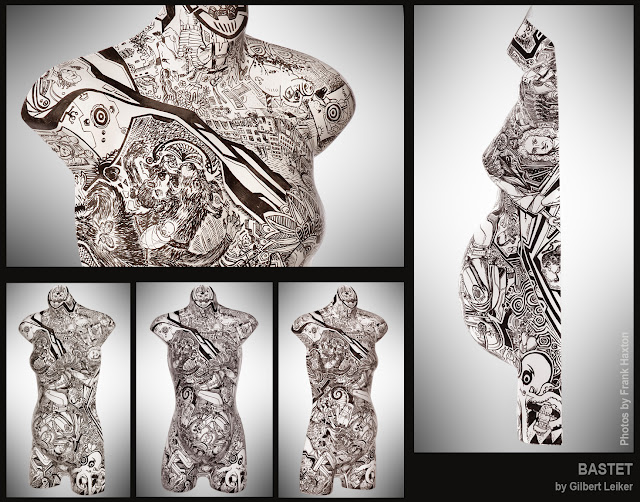 Bastet
Things we do not know:
- The nature of her mission.
- Where she is going, and how long until her return.

Things we know:
- The beast will keep you safe while she is gone.
- She will see new constellations and old gods flowing together on the river of time.
- Corpus omne perseverare in statu suo quiescendi vel movendi uniformiter in directum, nisi quatenus illud a viribus impressis cogitur statum suum mutare.
- Your M.O.T.H.E.R. loves you very much.

Ink on maternity mannequin
Approximately 17x32
Posted by Unknown at 6:08 PM No comments:

We Came to Hunt 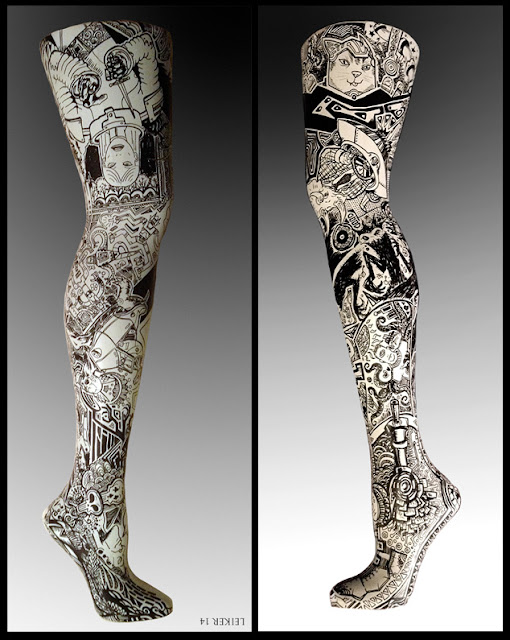 We Came to Hunt
Left to fend for herself, she hid from the shadows, only coming out for her nightly show. Traffic was flowing slowly but smoothly toward an open season. Like all explorers in a new world, we would make specimens and trophies of the locals. Our machines of collection would rattle and fuss and the robots would dance and sing along.

Ink on mannequin leg
28” tall
Posted by Unknown at 6:06 PM No comments: